The 8 Most Romantic Flowers for Your Next Love Scene

The 8 Most Romantic Flowers for Your Next Love Scene

Ah, spring is in the air and a young man’s fancy and all that…Okay, so I’m running behind by a season—it’s early July, and summer is officially here. Hey, at least I’m in the same year. However, though I’ve taken a break from writing, romance is still fresh on my brain which led me to think about flowers.

Hearts and flowers are a natural accompaniment to love, aren’t they? And seemingly ever have been when one glances back through time. These symbols of love endure in our collective brains.

Picture the suitor with an arm filled with flowers and a heart full of hope coming to call on his beloved. Or the simple red rose laid upon white linen or tucked under an unsuspecting recipient’s windshield wiper to be reminded they are cherished? Or the scene where the object of desire is inundated with dozens upon dozens of flowers. Who wouldn’t be swept off their feet? Well, unless the sender is a stalker, but that’s a different blog.

Back to flowers, and specifically, the quintessential red rose. If one were to look up “love” in the dictionary, you might expect to find the red rose there. So does that mean the red rose has cornered the market on romance? Not a chance. Sure, florists are busy assembling vases filled with red roses on Valentine’s Day, but what other flowers say I love you, I’m thinking of you, you rock my world?

From the Lola Flora blog, I “picked” (I just had to) some of my favorites from among the ten romantic flowers listed there. 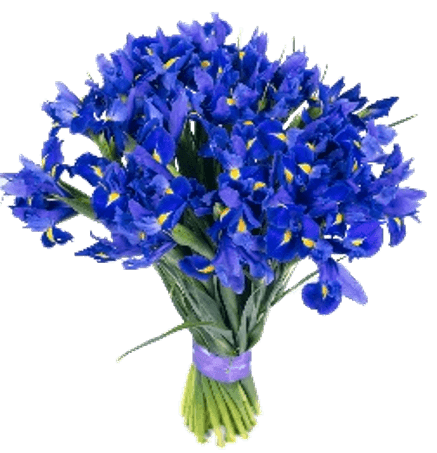 I’d never thought of this flower as “romantic” before. But I love blue irises, and I expect many others do too. Named after the Greek Goddess of the Rainbow, they’re stunningly vivid, among other attributes. And they’re unique. Picture a small bouquet clasped in a suitor’s hand, and my mind leaps to that person doing something different, thoughtful by seeking out a choice in flora that differs from the “norm.”

An all-time favorite of mine. When I lived in Northern California, a tall camellia bush grew outside the bedroom window of the little bungalow where I lived. I loved it even when it wasn’t in bloom, its dark glossy leaves reflecting sunshine, but when it burst into rosy blooms, it was beyond beautiful. It always brought a smile to my face and was a lovely greeting when I returned home after a long day at work.

The most common camellias come in a variety of pinks, reds, and whites. What a pretty bouquet they would make, and they look gorgeous floating in a vessel filled with water too.

Who can dislike daisies? Well, maybe I did for a few summers when the rascals spread throughout my flower bed, nudging my other favorites out of the way. But that was a long time ago, and I’ve gotten over it.

As Kathleen Kelly in You’ve Got Mail tells Joe Fox, “Daisies are the friendliest flower.” So cheerful, so full of sunshine and summer and brightness. It’s hard to look at a daisy and be sad, and as romance goes, I think these flowers say, “Hey, you bring all the best into my world. You make me happy,” or simply, “I really like you.” They’re a good choice for a budding relationship.

I’ve heard people criticize the lilac as being “old-fashioned,” but personally, I love the color and delicacy of their clustered blooms. Their perfume wafting through the air on a cool spring evening causes me to inhale deeply and repeatedly. Cut a few stems, and you have a lovely bouquet for a table or counter. They grow along the fence in my backyard in shades of white and the more customary light violet. 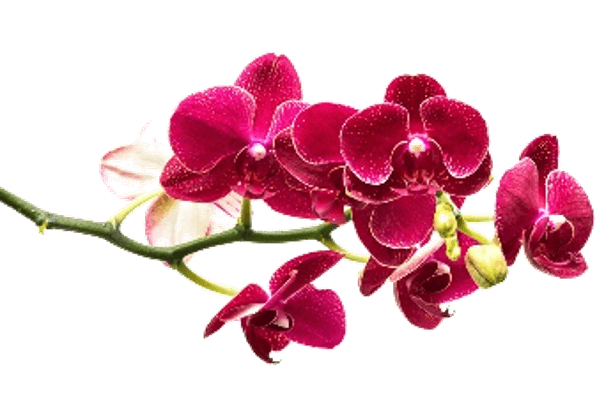 I grew up in the tropics where orchids were weeds in our garden. They stubbornly hung from trellises and latticed patio covers and generally appeared pretty much everywhere I turned. Though they may appear delicate to the touch, I never found them so. Their petals are thick and have a slightly waxy texture, unlike, say, a rose petal which is baby-skin smooth.

Orchids were my least favorite flower, likely because they were so commonplace and didn’t have any fragrance. Over time, I’ve grown accustomed to an arid climate with four seasons—in other words, someplace where the only tropical plants are grown indoors. As a result, I’ve come to appreciate the hardy yet beautiful orchid. And unlike my childhood flowers, the range of colors and types vary widely, from stark whites to vivid pinks and yellows to indigo so deep, it reminds me of a twilight sky. Simply breathtaking. 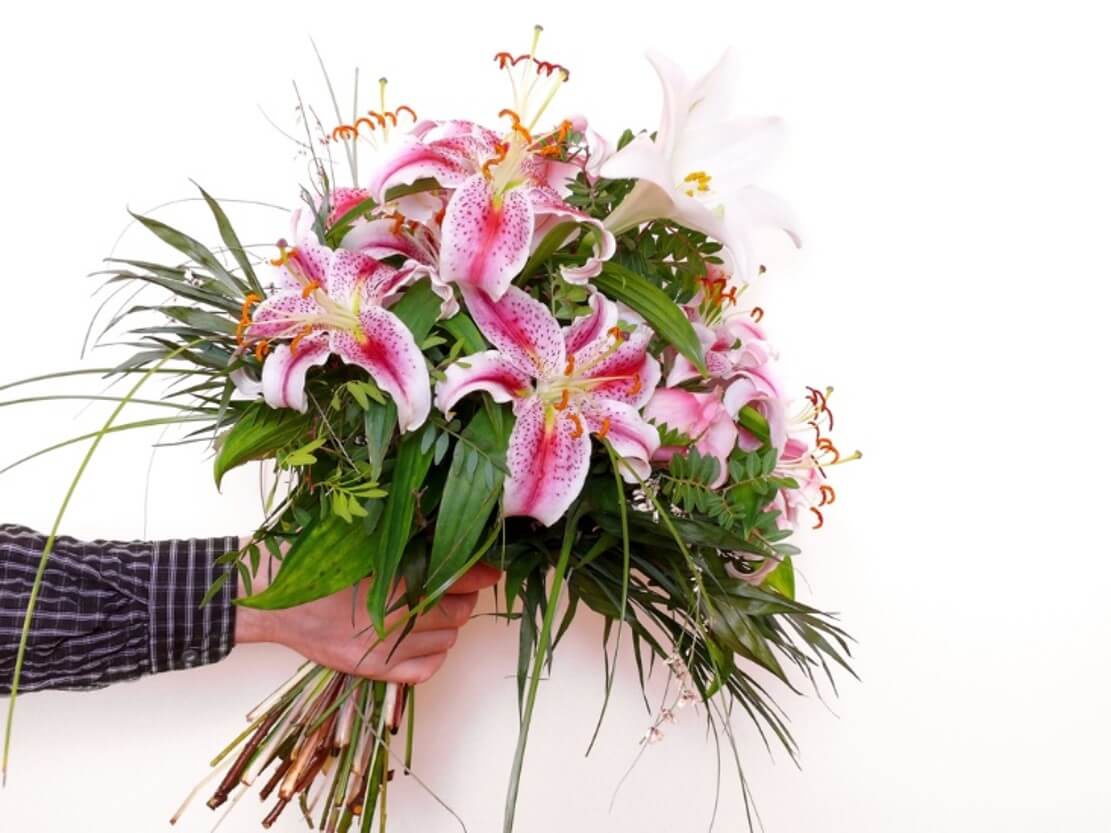 Even the name sounds romantic! For me, the title evokes visions of lying under a dark canopy sprayed with glittering stars, curled up beside someone you love. And the colors: vibrant pink that deepens, surrounded by white. But watch out for the rusty-colored pollen on the stamen. I’ve stained many an item of clothing by inadvertently brushing it.

Roses are the gold standard of romantic flowers. They come in many colors, and their meanings are just as varied. Deep red is associated with undying love, longing, and desire. Purple roses can mean love at first sight, while white roses are often used to express sympathy. Yellow, on the other hand, symbolizes friendship. As for pink, according to 1-800-Flowers, each shade carries its own meaning. All in all, roses in any color are a sure bet to express romantic love—especially when presented with a little jewelry box. ☺

According to the LolaFlora blog, tulips are the #1 romantic flower. As I’ve browsed different websites, I’ve noted that in depictions where someone is giving flowers to a love interest, there are at least—if not more—as many bouquets made up of tulips as there are roses. This is anecdotal, of course, but I can say that tulips topping roses on the list of favorites did not surprise me. And no wonder. Tulips represent spring, new beginnings, and come in a variety of shades. Like roses, different colors convey different meanings. Red, for instance, is all about love, while white is used to say “I’m sorry.” So many bouquets are made up of an array of colors—perhaps this is intentional, allowing the giver to cover all his or her bases by using a mix.

My list is by no means comprehensive, and I think many other floral candidates qualify for the Most Romantic category. Daffodils, dahlias, freesia, sunflowers. The possibilities are endless. Different websites list variations of this list, although there seem to be the constants.

One of my favorite bouquets is a simple one made up of fresh wildflowers in jaunty blues and yellows tied up in a ribbon. It’s not so much the flowers themselves, but the thought behind them. Someone took the time to hand-pick flowers, just for their beloved, and tie them in a ribbon. Do you hear the chorus of sighs?

In the smolderingly romantic Smoke in Her Eyes by Anna Belfrage, the main male character chooses a small bouquet of forget-me-nots and lilies-of-the-valley for his bride. Their simplicity, coupled with his thoughtfulness, made them an extremely romantic choice.

Taming Beckett’s main female love interest, Paige, loves Gerbera daisies, and those are precisely what Beckett sends her in his bid to wheedle his way into her closed heart. These flowers come in vivid oranges, pinks, yellows, and whites and resemble—no surprise—a daisy. Read a sample of the romance here.

Do you have any favorite flowers that especially evoke romance? I would love to hear about them. Leave me a comment below, and they might even find their way into my next novel.