I just returned from a two-week vacation to Central Europe, where I had the pleasure of touring Poland, Hungary, and the Czech Republic.

Though it’s the longest vacation since my lazy summers as a kid, to say time was too short is an understatement. There is so much to see! My focus was history, but that didn’t even scratch the surface of the wealth of sights—past and present—to be explored. Nor does it begin to address everything else these countries have to offer: culture, hospitality, beautiful countryside, museums, castles (yes!), food, music, etc., etc.

My visit left me thirsting for a return trip to immerse and learn more.

The Romance of Historical Structures 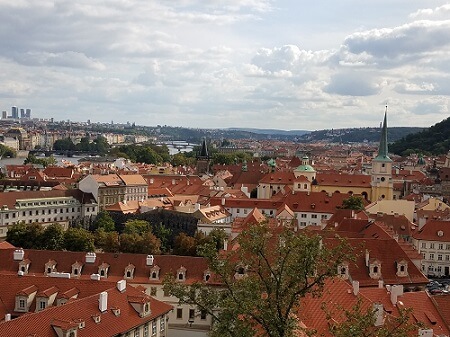 One of the many things that struck me profoundly were the man-made structures. Some of them have stood since the 10th century. While a lot of them are tumbles of ruins, a surprisingly large number still stand and are in use.

It boggles my mind.

As I sat in a café perched on a hill overlooking Prague, it occurred to me that numerous spires and rooftops I looked on were the same ones I would have admired had I been alive and sitting in the same spot centuries ago. The red-tile-roofed, spiky-spired scene, with the Vltava River cutting through it, was beautiful. Transporting.

And that provoked a thought: a virtual peeping through a different side of the prism through which I was viewing these cities, towns, and villages. I began to see these places with a romantic lens, alongside the historical one I’d been using. It got me thinking about what gives certain places that feel of romanticism.

When we think of romantic 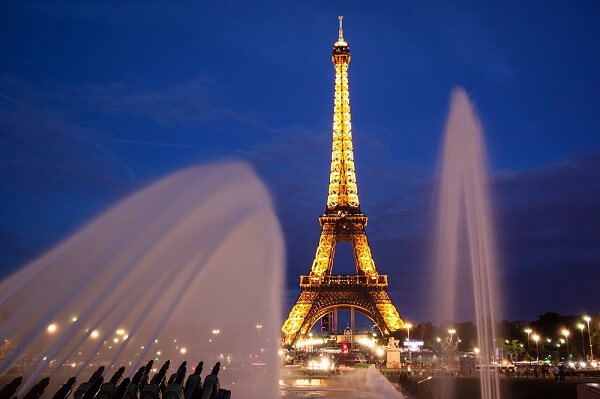 cities, what pops up first? My brain automatically screams “Paris!” Yet as I strolled through Kraków’s ancient market square—admiring the elegant, tall buildings from the past ringing its perimeter—I felt a certain essence, if you will, that caused an inner bubbling of pleasant sensations. Kraków definitely imbues that certain something that defines it, in part, as a romantic city.

I wanted to drink it in, let the vignettes work their magic in my soul. I realized that was what defined the romance of a city for me. I could’ve plunked my backside on a chair in an outdoor restaurant—and quite happily did so on numerous occasions—or lingered over lunch in an ages-old tavern tucked inside a quaint courtyard where vines grew up its stone walls.

It didn’t hurt that the weather was pretty much perfect, though I found myself wanting to return to the same scenes when the city’s blanketed in white and steam’s rising in the streets.

What Makes a City Romantic?

That being the case, I had to ask: What makes a city romantic? What is that certain something? An abundance of flowers? Horse-drawn carriages? Lovers displaying lots of PDA?

No. For me, it’s being transported to another place or another time because what I’m looking at is so appealing, intoxicating even, that I want to travel there in my mind.

Much like losing yourself in a novel, isn’t it?

And while Kraków, now one of my favorite cities, certainly imparts romance, so do other cities I visited: Gdańsk, on the northern rim of Poland along the Baltic Sea; Torún; Zakopane in the Tatra Mountains; Budapest; Prague. Sure, there were parts of the cities that evoked no romantic flare in my bones, but they were greatly outweighed by the parts that resonated within me. Maybe it’s a looking-through-rose-colored-glasses sort of thing (which, some would argue, is the definition of romance).

Was it because I was on vacay and didn’t have to wash a dish, make a bed, or do a load of laundry? No doubt the absence of mundane distractions helped set my mood. But when I lived in San Francisco, I did all those chores and still found the city romantic. It’s easy to get lost in its crowded Victorians, the vast bay on one side and the Pacific on the other, the cablecars, the fog—literally.

As I rode through Poland, gawking at castles and medieval towns, all that history oozing from ancient fortifications, I couldn’t help but pose the age-old, “If only these walls could talk.” And then my mind would gallop off, spinning about people who used to live there, characters enlivening in my mind’s eye.

But when I virtually ventured back to San Francisco, I realized that while the city’s rich in history, it’s not long in the tooth like, say, Prague Castle, Wawel Castle, or Kraków’s cloth hall and old market square. Yet it’s still a city that transports me, that embodies romance. It has that special something. 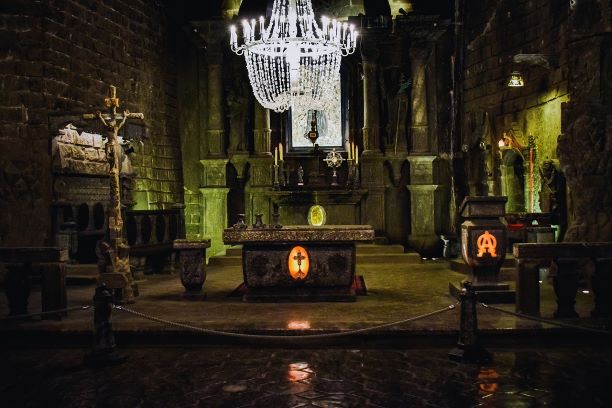 Which leads me to believe a city’s romantic aspect isn’t all about structures from long, long ago. Rather, I think it’s a vibe, a magic that settles over one and virtually puts them on a different plane, another dimension.

On a side note (and speaking of being transported), I was thrilled to take a tour at the Wieliczka Salt Mine outside of Kraków, even though it meant descending four-hundred-plus feet into the earth. I lost count of the levels and steps we trod along the way, but the total number of stairs was in the hundreds!

According to the literature and our guide, it’s been a working mine for over 700 years. Wow. More impressive, at least to me, is the evidence of those centuries in the mine’s immense caverns, tunnels, carvings, bas-reliefs, and mind-boggling chapels buried within.

You read that right. Chapels.

What does this have to do with romantic cities, you ask? Well, it depends on your point of view. Besides Holy Mass and other religious celebrations conducted there, weddings are held in the salt mine’s monumental Chapel of St. Kinga. Yes, far below ground. According to the guide, couples marry here in order to “show the depth of their love.”

Can you get any more romantic than that?