Spoiler alert: If you haven’t read A Hussar’s Promise, Book 2 in The Winged Warrior Series, you might want to skip this article.

If you have read it, you know Jacek suffers a fate that for many was worse than death, and I readily admit the research that went into this part of the book was fascinating, horrifying, and heart-shattering at the same time. I’m still haunted by what I discovered. It’s estimated that between the years 1500 and 1700, over 2 million people were taken from their homes in central and eastern Europe, captured and sold into slavery by the Crimean Tatars.

Life as a slave was harsh and brutal, no matter if one was relegated to hard labor in the fields or in a master’s home. But by far the worst fate was being sent to the galleys. The life expectancy for a fit young man after being put to the oars was no more than three years. And what a horrible three years those would have been, when one considers they were chained to their benches twenty-four-seven and the ravages of the salt water on their skin and the physical labor on their bodies. 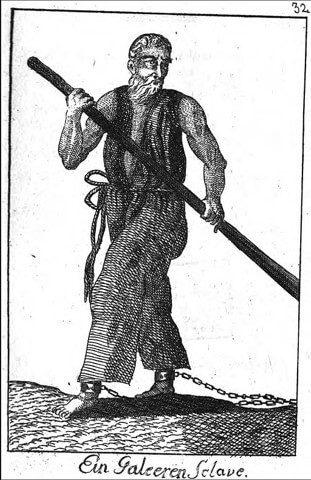 Fortunately for our hero, an opportunity presents itself to change the course of his own bleak future as well as those of his companions. And he takes full advantage. With huge doses of resourcefulness, courage, and—let’s face it—a nothing-to-lose attitude, he overcomes staggering odds and escapes life as a galley slave.

While I would love to say I invented the tale of Jacek’s escape, I must give credit where it’s due. In my research, I stumbled across the Account of Marek Jakimowski, a young Polish nobleman who was captured at the Battle of Cecora in 1620 and sold to a Turkish governor and admiral named Kassem Beg. While Marek Jakimowski’s story may have been embellished, it was nonetheless so uplifting in the midst of the countless tales of misery I was mired in that I decided to bring his story to life once more through Jacek.