Biaska Castle, the main stronghold featured in both The Heart of a Hussar and A Hussar’s Promise, is a fictional castle set among the Eagles’ Nests fortifications, an area between Częstochowa (Che-cha-ho-wah) and Kraków (Kra-koof) in southern Poland’s Jura Region. The area intrigued me, so I decided to set my fictional castle among these strongholds. Its location is loosely based on the spot where you’ll find Bobolice Castle, featured in the picture above.

The Legend of the White Lady

Researching The Winged Warrior Series led me down many a rabbit warren, where I spent hours chasing one fascinating story after another. Among those were several legends involving Bobolice Castle. I decided to weave one of those tales into the second book: the legend of the White Lady, a ghost who is said to haunt the castle. If you look just above the date stamp in my photo, you will see an orange triangle that’s a whimsical ghost “warning” sign. 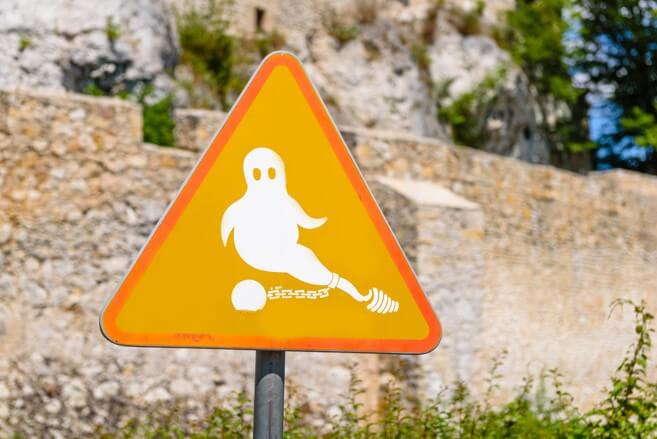 As the legend goes, noble twin brothers Bobol and Mir were so close they could read each other’s thoughts. Bobol lived in Bobolice and Mir in Mirów (see picture below), one mile apart. Best friends, they shared everything, including loot they acquired during many military campaigns they embarked upon for the king. Their wealth grew so large, in fact, that they dug vast cellars beneath their strongholds, adding a tunnel that connected them. It was in these cellars and the passageway that they stored their shared treasure.

During one of their campaigns, Bobol chose a princess–rumored to be Russian–as part of his plunder. Since the brothers couldn’t share her as they did the rest of their treasure, they drew straws to see who would marry her. Bobol won the prize. Matters of the heart being what they are, while the princess married Bobol, she apparently preferred Mir.

Unbeknownst to Bobol, his wife and brother became lovers. Whenever Bobol left his manor on a trip, Mir made excuses to stay behind so he could rendezvous with the lady in the tunnel during his brother’s absence.

Bobol apparently became suspicious, and one day he announced he was leaving for the royal court in Kraków, making a show of pulling together wagons and servants. Instead of proceeding on his trip, however, he stopped about a mile away in the forest. When night fell, he slipped back into his castle where he found his wife’s bedchamber empty.

He proceeded to the tunnel where he discovered her sleeping in his faithless brother’s arms. In a fit of rage, he took up his sword and killed Mir. His wife, however, suffered a far worse fate when he had her walled up alive. After several tortured weeks, she finally died from lack of water and food.

It’s said that on moonlit nights, a woman in a long, flowing white dress can be seen standing on Bobolice’s ramparts, looking toward Mirów for her love. Talk about a ghost story!

Pictures of Bobolice Castle and the watchtower at Mirów were taken on my first trip to Poland in August, 2017. So many castles to see, and so little time! 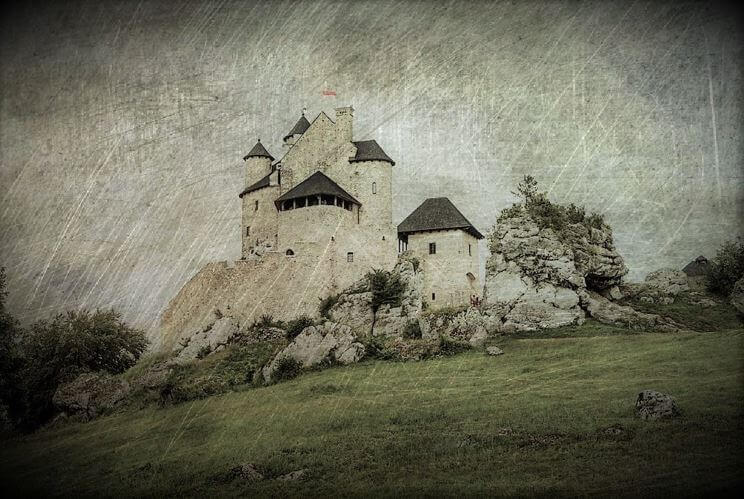 The Legend of the Three White Ladies

Bobolice and the other fortifications along Eagles’ Nests Trail trail were ordered built or reinforced by King Kazimierz III of Poland (better known as Kazimierz III the Great) in the 14th century to defend that portion of Poland’s border.

Bobolice, like so many medieval castles, has a number of legends associated with it. Last time, I told you about the White Lady, and this time, I wanted to share a different legend with you: the Three White Ladies. Good thing it’s a big castle, or it could get a little cramped in there.

The story begins in the 14th century when Władysław Opolczyk, Duke of Opole (a fiefdom of the Bohemian Crown), became the owner of the castle after it was awarded to him for his military service. Apparently, the Duke and his friends loved to hunt, drink, and party. Besides hunting wild animals, though, it is said they hunted girls from nearby villages.

On one particular occasion, they kidnapped three young girls and brought them to the castle. During the feast that followed, one of the girls drew a knife she’d hidden in her skirts and attacked a courtier. She and the other two girls dashed from the hall in a desperate attempt to escape, but they were pursued and couldn’t find a way out. Eventually they were trapped in a corner of the castle yard beside the tower. They climbed the steep steps, and with nowhere else to go, tried to escape by leaping from the tower. Alas, this proved a fatal move for all three as they did not survive the fall.

As with any good ghost story, it’s said that if you’re at the castle at midnight, you will hear terrible screams and see three ghostly shadows jumping from the tower. I wonder if the White Lady watches from the ramparts?

If you’re interested in the castles of Poland, here’s a fun map you can check out. 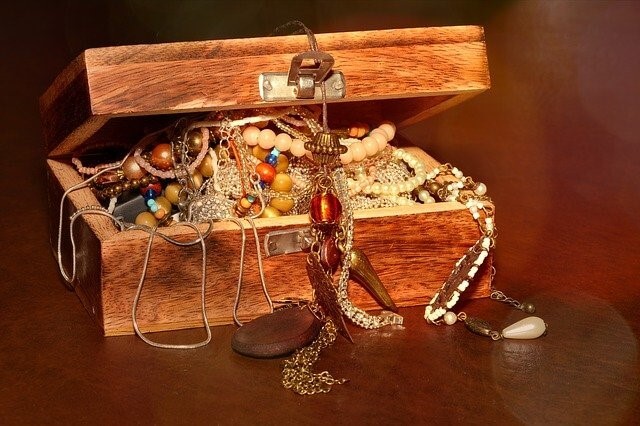 It’s rumored that In the 19th century, a huge treasure was found in Bobolice’s cellars, possibly in the tunnel that was supposed to have connected Bobolice to Mirów. There’s speculation not all of it was uncovered … maybe the White Ladies have chased off treasure hunters. Could the booty have been the fabled treasure stashed away by brothers Bobol and Mir?

The Pale Lady of Bobolice Castle 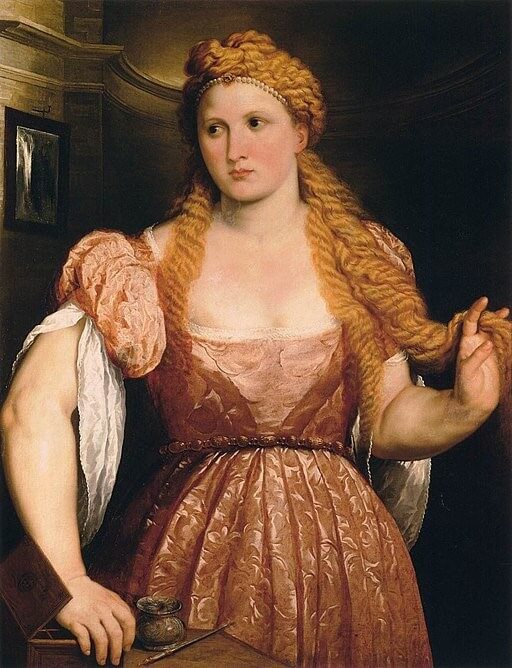 Paris Bordone’s Portrait of Young Woman at Her Toilet, 1550

This next story features a spectral lady as well, known as the “pale lady.”

Hundreds of years ago, the count and owner of Bobolice Castle married a young woman of 18 years, reportedly 42 years his junior. She might have looked like the woman in the portrait here. The marriage was a happy one, with the count being devoted to his wife and she to him. They were blessed with three children in the first five years, but alas, the old count died when the children were still young.

The widow, now in her early twenties, rejected suits from countless noblemen, deciding instead to devote herself to raising her children and content to live with her memories of her short but happy marriage to her late husband.

Unfortunately, not many years later, her two youngest children became ill and died, leaving her oldest. The late count had left everything to his children and, in the event of their deaths, to his widow. Apparently, he had some nasty relatives, and they accused the young widow of purposely killing her children so she could inherit her late husband’s wealth.

She was devastated by their accusations, but in accordance with her late husband’s wishes, she sent her last living child to be raised by them, which was a typical practice for sons of noblemen.

While the son was in the relatives’ care, it is said the mother developed a mystical bond with her only living son and could see him at all times. One hot day, as the boy’s guardian snoozed nearby, he waded into the water to cool off. The mother watched from afar as her son went in and never came out. He couldn’t swim.

She was so heartbroken over losing her last child that she died of despair shortly thereafter.

On occasion, she can be seen along the walls of the castle, pale and beautiful and heartbroken. Legend, however, says that seeing the “pale lady” brings good luck, so one might want to actually seek her out when they visit Bobolice Castle.

Through these three separate tales, we have a total of five ghosts. I wonder if those castle walls occasionally get crowded?