Wings of Splendor and Warfare

Wings of Splendor and Warfare

When I think of the Polish Winged Hussars, many adjectives leap to my mind at once: Fierce. Flamboyant. Intimidating. Boisterous. Honorable. Savage. God-fearing. They walked with a swagger that came from knowing they were the best and that they might die tomorrow.

Aside from their prowess on the battlefield, though, what set them apart were those magnificent wings! Sadly, like their long lances, the wings weren’t built to last and most did not survive the ravages of time. Evidence of their existence can be found in art and the few extant examples that did make it.

Did they really wear them, and why? According to narratives penned by those who witnessed the mighty hussars charging into the enemy, they did indeed wear them, but not always, and sometimes they were a single wing attached to the back of a saddle or the iconic pair bolted to their backplates.

While historians agree the wings existed, just how they evolved and their purpose are trickier questions. No one knows for sure, and in a desire to explain their phenomenon, theory and conjecture abound.

To explore their possible origin, let’s travel back briefly to the 16th century to the rise of the hussars. After the Union of Lublin, which formed the Commonwealth of Poland Lithuania in 1569, the Commonwealth’s southern borders came under attack from the Ottoman Empire. The Serbian and Hungarian territories were conquered, but a new type of soldier, a combination of Serbian and Hungarian, survived and soon would thrive in Poland: the hussar. The word hussar, in fact, harkens back to húsz, meaning twenty. It’s believed that the first hussars came from ranks of peasants, where one out of twenty was recruited into service. 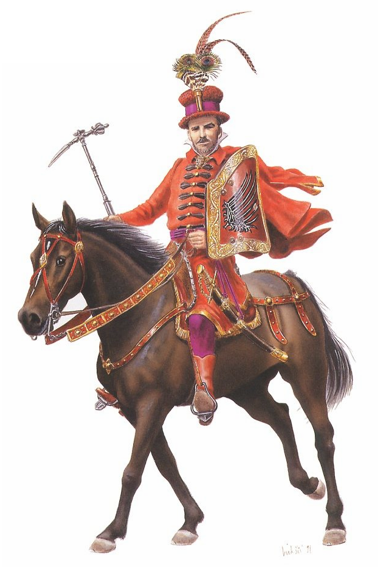 The Hungarian hussar was armored, but the Serbian was not. The Serbians, however, carried a light lance and an asymmetrical shield with a wing painted on it, like the one belonging to the fine fellow to the right. The Polish Winged Hussar is a combination of the two types of hussar.

In 1576, Transylvanian prince Stefan Bathory was elected king of Poland. It was he who standardized the Poles’ equipment so it matched his personal guard of Transylvanian and Hungarian hussars, giving rise to the Polish Winged Hussars. The shields were abandoned in favor of heavier armor, and the wings became more than artwork.

So why did they adopt the wings?

Some theorize they donned them because the noise would have frightened enemy horses. But consider that the thunder of their hoofbeats as they charged at an enemy line would have drowned out the sound.

orses. If you’ve read The Heart of a Hussar, you know I like that theory myself, though history offers us no proof.

How about psychological warfare as a reason for wearing the wings, to frighten the enemy and his horse? It’s hard to know what effect the visual of those shuddering wings would have had on enemy horses, but it must have been terrifying to be a human on the front line while a wall of winged cavalrymen was bearing down. Not only would the defender have seen the horrifying sight coming at him, he would have felt the vibration of the hoofbeats through the ground. The hussars would have appeared larger than life, something akin to God’s archangels. The beautiful depiction by artist Mariusz Kolik above (titled “The Battle at Chocim”) gives an almost 3-D visual of what it must have looked like.

Given their deep sense of religion, I imagine the hussars would have taken some measure of pride in being compared to archangels. They certainly lived and breathed the notion that they were the “Bulwark of Christendom,” fighting for their God and country.

Another explanation for the wings has nothing to do with battle. Some surmise they were one more accoutrement that bespoke the splendor of the hussar and were worn mainly for show, for parades and the like. In other words, plain old vanity. These men were peacocks, and they dressed in their finery before meeting the enemy on the battlefield, so the theory definitely has merit.

Whatever the reason, the wings set the Polish Winged Hussars apart from other cavalry of their day and lend them an air of timelessness that continues to fascinate.