The Horse of a Hussar

The Horse of a Hussar

I’ve probably said this before, so kindly bear with me, but the Polish winged hussars were formidable. To summarize briefly, they were an elite cavalry, a 17th century equivalent of our modern day shock troops. Like today’s highly trained special forces, the hussars made up a small fraction of an army, yet they were often a game-changer in battle. Their job was to break through the enemy’s defenses so infantry and lesser cavalry could carry the attack, and they did this by charging straight at their opponents.

Among a hussar’s skills was the ability to wield a kopia (long lance). He was also an expert swordsman and marksman and was proficient with a warhammer, bow and arrow, and myriad other weapons of his day.

And he did it on horseback.

How was he able to pull it off? Hours upon hours of practice. A hussar’s training began when he was a boy, but before everything else, he learned the most important skill of all: how to ride.

Horses were highly revered in the Polish culture. A popular saying went, “A Pole without a horse is a body without a soul.” Lords started their sons early, often putting them on the backs of horses when they were younger than two.

A hussar’s success on the battlefield depended greatly upon his warhorse. Take away his horse, and his power was slashed. When one considers that the hussars galloped at the enemy line in tight formation (some narratives record this formation as knee-to-knee), their combat horses had to be as highly trained as they were.

So let’s take a look at the hussars’ equine partners.

They came from a combined lineage of Polish and eastern horses, usually from Tatar stock, and were bred over many generations to produce animals capable of:

The typical hussar warhorse was smaller than one might expect, measuring 15 hands (5 ft. from hoof to withers). But keep in mind, the average height of a 17th century eastern European man was 5′ 6″. Like the hussar, the animal’s training began early, though its training for combat did not begin in earnest until the animal was five years old, and it was at least seven when it was put into service. Many animals did not make the cut, “washing out” after a time—not so different from a modern-day service dog dropout.

The animals who did make the cut were invaluable to their hussars. Depending on a hussar’s wealth, he had anywhere from 3-6 horses he would take into battle (this number didn’t include the draught horses who carried his wagons loaded with provisions and camp stuffs), and each warhorse was worth between 5-10 times a hussar’s annual salary. No wonder hussars were in the noble class. They were the only ones who could afford such fine animals! Good thing money wasn’t what motivated a hussar to fight. He did it for country and glory, for favorable government posts, or in Jacek’s case, for the reward of lands.

The Polish winged hussars dominated warfare for over a hundred years. One big reason for their success was the terrain on which they fought. The wide-open plains of the Wild Fields (also known as The Great Steppe or the Pontic Steppe), lent itself to cavalry. 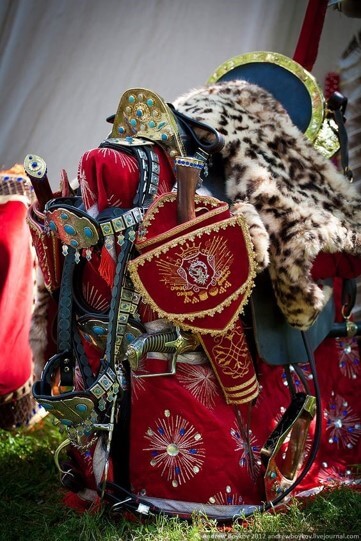 Whether stallions, mares, or geldings were favored was a detail I could not pin down during my research for The Heart of a Hussar and A Hussar’s Promise. I did discover that the showy hussars, who loved to dress extravagantly when going into battle, also outfitted their horses in fancy trappings as well, such as silver, gold, and gems.

So how did a charge work? Winged hussars came in waves, the distance between each row approximately the length of a horse. Usually they needed no more than one or two charges before an enemy line was broken. 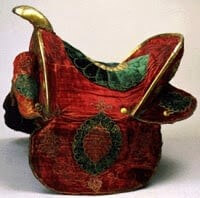 I’ve read that hussars could cover 120 km day, or 75 miles, which is hard for me to wrap my head around. They could travel this sort of distance because of the warhorse’s breeding and the style of saddle they used. The saddle was of eastern style, deep and covered in embroidered leather or velvet.

Eventually firearm technology improved, allowing more accurate shots at greater distances, which spelled the end of the Polish winged hussar. I’ve said this before too, so I beg your indulgence one more time: How I wish I could climb aboard a time machine, travel back to the 17th century, and watch a hussar charge! From a safe distance, of course.